The high level of disease in modern man is a stark contrast to the low level of those diseases in unacculturated hunter gatherers. Paleolithic diet buffs believe this is due to differences in their diet. We believe that diet is the main cause of disease. Why then is so much research focused on finding genetic causes of disease? The reason is a simple logical fallacy- as nearly everybody eats a Neolithic diet, most lines of research won’t show up the dietary cause as the researchers are looking at groups who are all on the same harmful diet. Therefore it looks like diseases are genetic, when in fact they are dietary. While some diseases are clearly entirely caused by a gene, they represent a fairly small and well documented number. in the rest of cases, the genes have a variable influence, probably representing gene nutrient interactions.

I am grateful to salt expert Dr Trevor Beard www.saltmatters.org for bringing this to my attention. He quotes one of the best-known publications of a British epidemiologist named Geoffrey Rose, now deceased (a sad loss). The exact words from page 32:

If everyone smoked 20 cigarettes a day, then clinical, case-control and cohort studies alike would lead us to conclude that lung cancer was a genetic disease; and in one sense that would be true, since if everyone is exposed to the necessary agent, then the distribution of cases is wholly determined by individual susceptibility.

The hardest cause to identify is the one that is universally present, for then it has no influence on the distribution of disease.

General Rants, Genetics (Science as a farce), Phenotype- The Ultimate Result we see |

The Paleolithic Diet is the only diet that is over 2 million years old. While it is ideal for most people, there are exceptions. It is definitely not suitable for people with iron overload (haemochromatosis, hemochromatosis) as it is very high in iron. It is not suitable at this stage for people with kidney disease as it is high in protein. Its effect on gout is not yet known and it should be avoided in uncontrolled gout.

It is recommended that you have regular checkups from your registered licensed health care provider and follow their advice.

In pregnancy and other situations, care must be taken to observe advice from your registered licensed health care provider- for example to avoid foods that are at risk for Listeria infection in pregnancy.

The information in this website is of a general nature only and may not be suitable for you. It is not a substitute for advice from your registered licensed health care provider. This website is not intended to diagnose treat prevent or cure any illness.

Consuming raw or undercooked meats, poultry, seafood, shellfish, or eggs may increase your risk of food-borne illness, particularly in the elderly, in children, in pregnancy, and those with immunosuppression or chronic diseases such as gut diseases, diabetes or renal impairment. The risk may be worse in certain countries. If you are unsure, consult your doctor prior to changing your eating habits.

Wishing you the best of health

Introduction to the Paleolithic Diet

The germ theory of disease is medicine’s main success area. It lead to immunisation and antibiotics. Besides infections, which diseases do we know the true origin of?

Infective, traumatic, toxic and a handful of the population have significant genetic disorders.
These are the only ones we can prevent and we have good methods of treating. We can also treat deficiencies and surgeons can treat regional complaints (eg kidney stones, appendicitis, gallstones- but as we do not know the cause we can’t prevent them).

This is the true irrationality of health- medicine is in such a primitive state that it only knows the origin of about 15% of disease! If that. We don’t know the true origin of cancer, arthritis, asthma, gallstones, kidney stones, appendicitis, diabetes type 1, autism. Much money is used looking for genetic origins, yet it is unlikely they will be found.

Actually I think they are all primarily nutritional in origin- that’s why I’m interested in nutrition!

We need to jump away from the common mind set that confuses PHENOTYPE with GENOTYPE. Phenotype is what “we get” and what actually matters. The phenotype is the “final product” that we get to see, whether it be height, weight, strength, blood pressure, cholesterol, heart disease, cancer, depression or any other feature of the organism. Genotype is the architect’s plans which usually have some differences from the building itself.

The phenotype is like the final building, the genotype like the architect’s plans, the diet like the building materials and exercise like the workmanship. Anyone who has built or renovated a house knows that mistakes in the plans (genes) are fairly uncommon compared to cheap substitute materials (poor diet) and poor workmanship (lack of exercise). We have a few genetic diseases, then a lot of gene nutrient/diet interaction diseases, then a great mass of straight out dietary diseases.

I say this because as a doctor, I think most doctors behaviour indicates that they confuse phenotype with genotype. This mindset causes a fatalism that thinks that no treatment is worthwhile other than a drug. Personally I think that variations in diet and exercise have a greater influence on variations in phenotype than do variations in genotype. Which is why I am interested in nutrition- if the previous sentence were not true, then there would be no point in studying nutrition or exercise. There would be no point in the 18,000 diet books on Amazon. But I think people’s instincts are correct, that diet does have a profound influence on health. And we can change our diet but not our genes. And we have to eat, so why not improve our health as we do it?

Even though the sentence in bold is somewhat philosophical, I hope it is not too confusing. Jerome Groopman wrote a nice book “How Doctors Think” or don’t think, or have a herd mentality like everyone else might be better titles. How we model health is profoundly important, the better our model, the better we perform. Imagine treating pneumonia before we knew about bacteria- this is a good illustration of how the correct model transforms everything.

This is Simopoulos’ Hippocratic model http://www.fao.org/docrep/W5849T/w5849t08.jpg This expands the bio-psycho-social model to add spiritual.

I use a slightly more detailed model… You can pop in sunlight, gravity and any other attribute you wish under environmental or social. Spiritual should be a separate category but I didn’t put it in then. I’d probably also add education, government and a couple of others, Any suggestions? 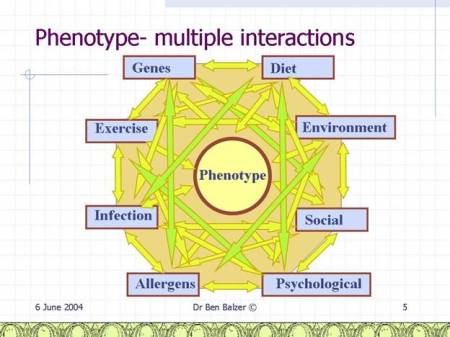 Phenotype- The Ultimate Result we see |